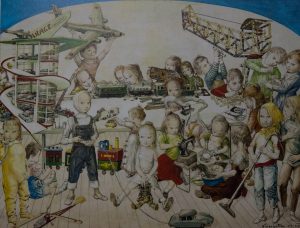 The following is an essay that I wrote as an assignment for an English school AEON:

Let me start with one picture of Tusguharu Foujita (Leonard Foujita) that I found in his exhibition held in September:

The picture was drawn in 1958 and 1959 and was titled “The Machine Age”.
It may draw nostalgic reaction from people born in around that time. (I was born in 1961.) Most toys shown in this picture are quite familiar to me, such as tin toys (I had one of Astro Boy at home), remote-controlled cars, toy cars (in Japan they were called “minicars”), HO scale train models, and so on.
As the title of the picture shows, the 1960’s were really “the machine age”, and Japan was just in the midst of high-speed economic growth. In my childhood, I believed so many things were common knowledge without any doubt such as:
(1) Economics will grow eternally.
(2) No music, no life (sorry Tower Records)
(3) Human beings will soon reach Mars, Jupiter, or Saturn.
(4) Flying cars will be available within several decades, at the latest by the 21st century.
(5) Animation films or dramas are mostly Sci-Fi based.
(6) Students are attending universities not to study, but to join political movements or some protests.
(7) The whole world will perish soon with nuclear weapons.
All of these expectations were revealed to be untrue, in the 1970’s or later. (The last one was fortunately proven to be not true.) I gradually started to think that the 1960’s were actually very unique, strange, but energetic periods that are completely different from the 1970’s, 80’s, or later. I also knew that there had been some “spiritual” people claiming that the 1960’s had been the start of “new age”.
I am currently addicted to watch Sci-Fi based old TV dramas from the 1960’s. I have so far bought DVDs or Blue-rays: the four series of Irwin Allen dramas (Voyage to the Bottom of the Sea, Lost in Space, The Time Tunnel, and Land of The Giants), two of Gerry Anderson’s (Thunderbirds, UFO), and the original series of Star Trek by Gene Roddenberry. By watching them, I can now understand how I was brainwashed or imprinted during the 1960’s as a then kid. In 2018, very few people care about cold war (except concerns for the start of “new” cold war with China), only limited people talk about possible “doomsday”, but such topics were quite seriously considered in many of the above dramas.
Honestly to say, I’m living 50% of my life still in the 1960’s. You can check out any time you like, but you can NEVER leave!