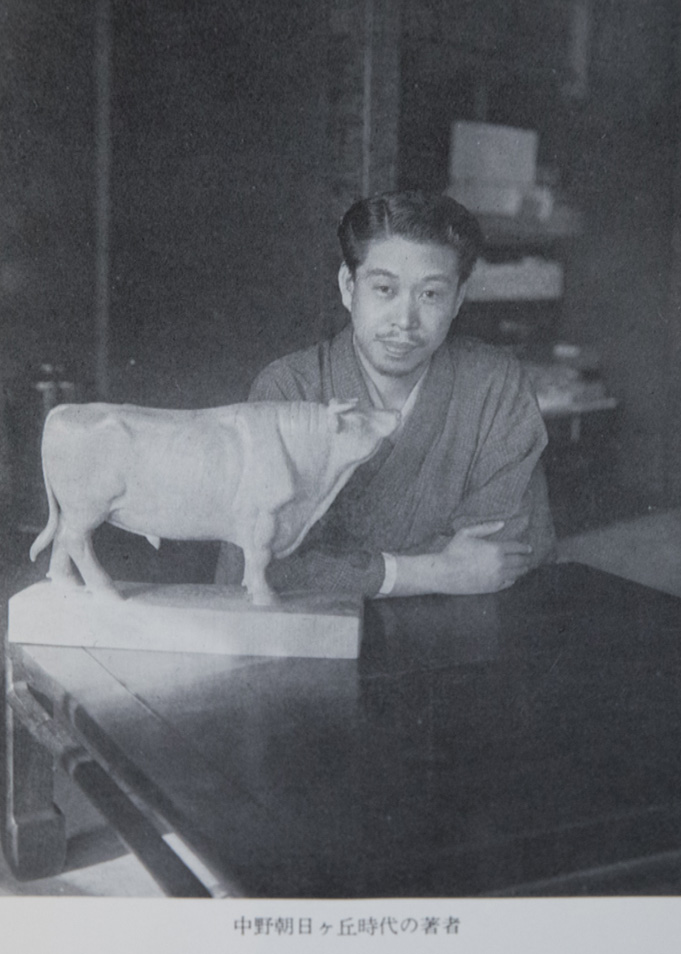 Kyoji Shirai’s photo (from his autobiography) when he was living at Asahigaoka, Nakano in Tokyo (1926 – 1933). Kyoji loved slow but steady steps of a cow, and he practiced “Fabian tactics” in literature.

As I stated in the previous article, Kyoji Shirai was one of the most important novelists in an emerging stage of public romance. Let me now describe his life and some of his works in detail.

Kyoji Shirai was born in Yokohama in 1889, as the first son of Takamichi and Tami Inoue, who were both from Samurai (warrior) class of Tottori prefecture. When he was born, Takamichi was working as a policeman of Yokohama city. Kyoji inherited the sense of justice from his father. Because of the frequent changes of his father’s working place, Kyoji kept on the move from Ome, Kofu, Urawa, and to Hirosaki in Aomori prefecture. In 1902, he finally settled in his parents’ home town, Yonago in Tottori. While he was attending Yonago east high school, he wrote two novels and they were put in two local newspapers, showing his precocious talent as a writer.

He entered then Waseda university but he soon moved to Nihon university by his father’s request that he should become a lawyer. While he was studying at Nihon university, he translated many works of Saikaku Ihara (“井原西鶴”) and Monzaemon Chikamatsu (“近松門左衛門”) into the modern Japanese for Hakubunkan (“博文館”), which was one of the biggest publishers at that time in Japan. These works gave him deep knowledge of the Japanese literature in Edo period, and he utilized many episodes or anecdotes in this period later in his works.

After he graduated Nihon university, he started to work at a few publishers and got married with Tsuruko Nakajima, a daughter of a baron Masutane Nakajima, in 1916.
In 1919, he wrote “Kai-kenchiku juni-dan gaeshi” (“怪建築十二段返し”) as his first work under the name “Kyoji Shirai” and the manuscript was offered to Hakubunkan. The publisher put the work in the January issue of “Kodan zasshi” (“講談雑誌”) in 1920. This first work was welcomed and he received requests for other works one after another. Ryunosuke Akutagawa (“芥川龍之介”) praised Kyoji’s “Ninjutsu Koraiya” (“忍術己来也”) enthusiastically and “Shimpen Goetsu Zoshi” (“神変呉越草紙”) also got a favorable reception.

In 1924, he started to write two most famous works, namely “Shinsen-gumi” (“新撰組”) and “Fuji ni tatsu kage” (“富士に立つ影”), and established his fame by these two great novels. The former was put at the head of a weekly magazine “Sunday Maichini” (“サンデー毎日”), which was the first weekly magazine in Japan, and the magazine could get enough number of readers to survive as an independent magazine by his novel. The latter was serialized in the Hochi newspaper (“報知新聞”), which was one of the biggest newspapers at that time, and it continued for more than 1000 times. The hero in this novel, Kimitaro Kumaki (“熊木公太郎”), attracted the readers overwhelmingly by his honest and decent character. As I introduced before, Ryunosuke Tsukue (“机龍之助”) in Dai Bosatsu Touge (“大菩薩峠”) was the first typical character type in public romance with his nihilism and cruelty, but Kyoji created then a completely different type of bright character with this novel. (to be continued)