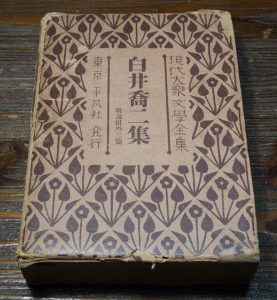 Heibonsha: the first volume of the complete set of public romacnes (Kyoji Shirai)

The current available version of Shinsen-gumi published by Kodansha.

Let me introduce today another great work of Kyoji Shirai, namely “Shinsen-gumi”.
Shinsen-gumi was serialized from 1924 through 1925 on a weekly magazine “Sunday Mainichi”. Sunday Mainichi was published by Mainichi Newspapers Co., Ltd as the first weekly magazine in Japan. As the name shows, the magazine was first published as a Sunday issue of Mainichi newspaper. Since the distinction between normal newspaper and this weekly magazine was not clear for many readers, the number of prints remained stagnant in the early stage. The publisher then tried to make the contents of this weekly magazine clearly different from daily newspapers and it placed Kyoji’s new romance on the top of the magazine. It was a kind of gamble for the publisher, but very interesting stories of Kyoji’s novel attracted many new readers and the financial status of the magazine was thoroughly stabilized.
Another important topic related to this romance is that it was put in the first volume of the Heibonsha’s complete set of public romances, to which Kyoji committed himself very much. The fact that 330 thousands copies were sold for the first volume brought a big success to this set.
Shinsen-gumi was a group of Samurai warriors who guarded Kyoto under the authority of the Tokugawa Shogun regime from around 1863 through 1867. Many members of Shinsen-gumi took rather violent and brutal ways to guard Kyoto and killed many pro-Imperialists by their Japanese swords. Shinsen-gumi was one of the most favored topics for many novelists of public romance at that time.
Kyoji, however, did not write an usual story related to Shinsen-gumi. The story of the romance was mostly of battles between three different schools of spinning tops. Spinning tops were not only toys for kids but also a genre of street performance in Japan. A school of spinning tops here means combination of street performers and meister-level artisans. The first battle was between Orinosuke of Tajimaryu school and Monbee of Kinmonryu school. In this battle, two beautiful ladies were the prize of the battle, and the lady of the lost side had to be gifted to a foreign merchant. The second battle was between Orinosuke and Inosuke of Fushimiryu in Kyoto. In the second battle, both participants tried to get the heart of a lady.
These battels of spinning tops described in this romance were technically very deep and enthusiastic. For example, the both sides selected very special types of wood for their tops and the battle started from guessing which type of wood the counterpart selected. Orinosuke used one very special wood growing on the Nokogiri-yama mountain in Chiba, while Monbee selected one growing on Ontake mountain in Nagano. The Monbee’s top could generate strange wind while it spins trying to weaken the rotation of the counterpart’s top. The Orinosuke’s top, however, was not affected by the wind from the Monbee’s top, since he used a special wood growing on Nokogiri-yama mountain. (It means that Monbee failed to presume the type of wood used for the Orinosuke’s top). This kind of “professional” battles between two craft-persons attracted the then readers much and made them excited.
On the contrary to the battles of tops, Shinsen-gumi plays only in the background of the stories. Orinosuke witnessed the famous Ikedaya incident in which Shisen-gumi killed many famous pro-Imperialists. Kyoji developed a new way of fights between appearing characters in a romance other than sword battles (Chambara). This can be compared to the fact that he adopted a battle by debates in Fuji ni tatsu Kage.
The impression of this romance to the readers was tremendous and people requested Kyoji to write another romance of this type and it distressed Kyoji later for a long period, since he was thinking that he was always trying to change his styles and did not want to stay at the same stage.

One thought on “Kyoji Shirai: Shinsen-gumi”